As I am refreshing my research into natural cancer cures for an upcoming talk, I was reminded of this important piece of history, a reminder to all that the upper echelon of corruption stems back hundreds of years and continues still to this day.

I was blessed to meet Charlotte Gerson and her son Howard Strauss in 2005 at an Orthomolecular Conference where I met many of my medical heroes, like Abraham Hoffer. Here is a picture of me with Jan Riordan (the late Hugh Riordan’s wife) & Margo Kidder, who told me she suffered from severe bi-polar attacks and Dr. Hoffer saved her life, meeting them and many more greats at that very same conference. I had met Charlotte just moments before this photo was taken.

The second photo (below) I am with Dr. Carolyn Dean (whom I stayed with at the hotel) and Dr. Andrew Saul and well as other Health Freedom fighters. This conference inspired me then as much as it does now, to keep on spreading the truth and the real solutions that EXIST for curing cancer.
​
Here are the Hall of Fame inductees for that year and I was so fortunate to have met most of them:

The medical mafia giant is so huge, the media is smothered and owned by the same interests, and many have fought them and lost, like Rene Caisse and Harry Hoxsey, but we still battle on and keep the medicine getting into the hands of the patients that are aware of the bamboozle and willing to listen, learn & heal.

A Thousand-Plants-Against-Cancer on this Pdf, is a proposed US Senate Bill 1875 known as The Pepper-Neely Anticancer Proposal . It displays just how corrupted and persuaded our government is with regards to the suppression of alternative medicine with respect to cancer research. As Alex Collier stated “The Pirates hijacked the ship”.

“During a three-day period, July 1 to 3, 1946, the United States Senate took testimony from nationally known cancer researchers relating to U.S. Senate Bill 1875, also referred to as the “Pepper-Neely anticancer proposal”.

In this bill, Senators Pepper and Neely recommended the appropriation of $ 100 million from the U.S. government’s budget for cancer researchers to find a cure for cancer once and for all. After his two Washington, D.C.-based investigators, a physician and an attorney,reported back to Senator Claude Pepper (D-Florida) that Dr. Max Gerson did, indeed,have a successful treatment for cancer for the first time in history, the United States Senate invited a medical doctor to demonstrate his specific therapeutic approach for curing cancer. Accordingly, Dr. Gerson brought five of his cured cancer patients and the records of five more for presentation before the Pepper-Neely anticancer subcommittee of the Senate Committee on Foreign Relations of the Seventy-ninth Congress.

The impressive testimony of this anticancer specialist and his patients caused Senator Pepper to call a press conference for bringing information about the Gerson Therapy before the media. However, massive numbers of lobbyist for the immensely wealthy Pharmaceutical Manufacturers’ Association (PMA), the American Medical Association (AMA), and the American Cancer Society (ACS) prevailed on reporters
to ignore the Gerson press conference and attend a cocktail party instead where free food would be served and libations would be flowing.

The only reporter who preferred to hear the Gerson presentation was American Broad-casting Corporation newscaster Raymond Gram Swing. During World War II, Mr. Swing had been a famous war correspondent on a par with Edward R. Murrow. He attended and took copious notes at the Senate press conference for use in his East Coast 600 P.M. ABC
network broadcast of Wednesday, July 3, 1946.

Here is what Raymond Gram Swing broadcast then throughout the United States:

I hope I have my values right if, instead of talking tonight about the agreement reached on Trieste by the Foreign Minister in Paris, or the continuing crisis of the OPA in Washington , or President Truman’s signing of the Hobbs anti racketeering bill, I talk about a remarkable hearing before a Senate Subcommittee in Washington yesterday on cancer and the need for cancer research in new fields.
A bill is before Congress, the Pepper-Neely bill, to appropriate a hundred million dollars for cancer research with something like the zeal and bigness with which it went for the release of atomic energy, turning the job over to the scientists with resources generous enough to solve the problem.

This alone would make a good theme for a broadcast, just an example of the use a great democracy can make of its intelligence and wealth. But the subject has been made peculiarly gripping by unprecedented happenings yesterday before the subcommittee which is holding hearings on this bill, and of which Senator Pepper is chairman. He invited a witness, a refugee scientist, now a resident of New York, Dr. Max Gerson, and Dr. Gerson placed on the stand, in quick succession, five patients. They were chosen to represent the principal prevailing types of cancer, and in each instance they showed that the Gerson treatment had had what is conservatively called “favourable effect on the course of the disease”. That in itself is remarkable, but it is the more so because Dr. Gerson’s treatment consists mainly of a diet which he has evolved after a lifetime of research and experimentation. To say that Dr. Gerson has been curing cancer by a dietary treatment is medically impermissible, for the reason that there must be five years without recurrence before such a statement is allowed. Dr. Gerson has cured tuberculosis and other illnesses with his diet, but in the U.S.A. he has only been working on cancer for four and a half years…..

Yet anything that offers even a possibility of treating successfully at least some of the four hundred thousand existing cancer cases in this country is stirring news, no matter how conservatively it is formulated. There would be non Pepper-Neely bill to appropriate a hundred million dollars for cancer research if the existing research were coping with the need.

…I have spoken about this carefully and abstractly, which underplays some of the shock and delight of the experience yesterday at the hearing of the Pepper Committee. It is one thing to talk about chemistry and diet and vitamins and other factors in medical science. It is another to see, as the Committee yesterday saw, a seventeen-year-old girl, who had a tumour at the base of the brain, which was inoperable, and which had paralyzed her. Yesterday, she walked without assistance to the witness chair, and told clearly about her case and her treatment.

There was a sturdy man, who had been a sergeant in the army. He had had a malignant tumour, also at the base of the brain, which had been operated on but needed deep X-ray treatment, and this he could not receive because of the danger to the brain. Yesterday he was the picture of health as he testified, and quite naturally he was proud of his remarkable recovery.

There was a woman who had had cancer of the breast which spread. Yesterday she was well, and testified with poise and confidence.

A few cases showing such improvement cannot, of themselves, affect the outlook of the medical profession. But they are attested facts and not flukes, and as such they have to be accounted for. And there are many, many more cases which could have been cited. It would seem to be the business of medical research to leap on such facts and carry every hopeful indication to a final conclusion…. So the advocates for the Pepper-Neely bill can argue that, unless we learn now how to deal successfully with cancer, many millions of persons now living in this country are condemned to die from cancer. A hundred million dollars is little more than a token payment for America to make, in order to avert such a sweep of death, and they can then point to the Gerson dietary approach as a most promising field of research….

Dr. Gerson was an eminent if controversial figure in pre-Hitler Germany. He was bound to be controversial because he was challenging established practice in treating tuberculosis by diet. He has been assistant to Foerster, the great neurologist of Breslau, and for years assistant to Sauerbruch, one of the great physicians on the Continent. The Sauerbruch-Gerson diet for skin tuberculosis is well-known to European medicine, and the account of it is part of accepted medical literature. Dr. Gerson told the Pepper Committee that he had first come upon his dietary theory in trying to cure himself of migraine headaches. Later he treated others, among them a man with skin tuberculosis as well.

Dr. Gerson was an acknowledged dietary autority in Weimar Germany, and was responsible for the German army of his time being placed on dehydrated, rather than canned food…..

Raymond Gram Swing continued with his network radio broadcast and brought in some additional news too. After he ended, the telephone switchboard lit up at the American Broadcasting Corporation in New York City. People called in from all over the nation to learn about the Gerson Therapy. But other, darker, more powerful commercial and political forces had been listening as well.

The executive directors of pharmaceutical companies producing cytotoxic agents (Chemo-therapy) for cancer treatment – members of the PMA – threatened to cancel all radio advertising contracts for their drugs sold over the counter, an annual loss in revenue for ABC amounting to tens of millions of dollars. Within two weeks of that
fateful radio broadcast which apprised people of a potential cure for cancer, after thirty years at the same job Raymond Gram Swing was fired his position as a newscaster for the ABC network.

You might also wish to know what happened to the Senate’s 227-page Pepper-Neely anticancer bill of 1946-Document No. 89471. By efforts of the lobbyists working with four senators who were also medical doctors, the bill was defeated. Today, Document No. 89471 is stored in boxes and gathers dust in the archives of the U.S. Government Printing Office. 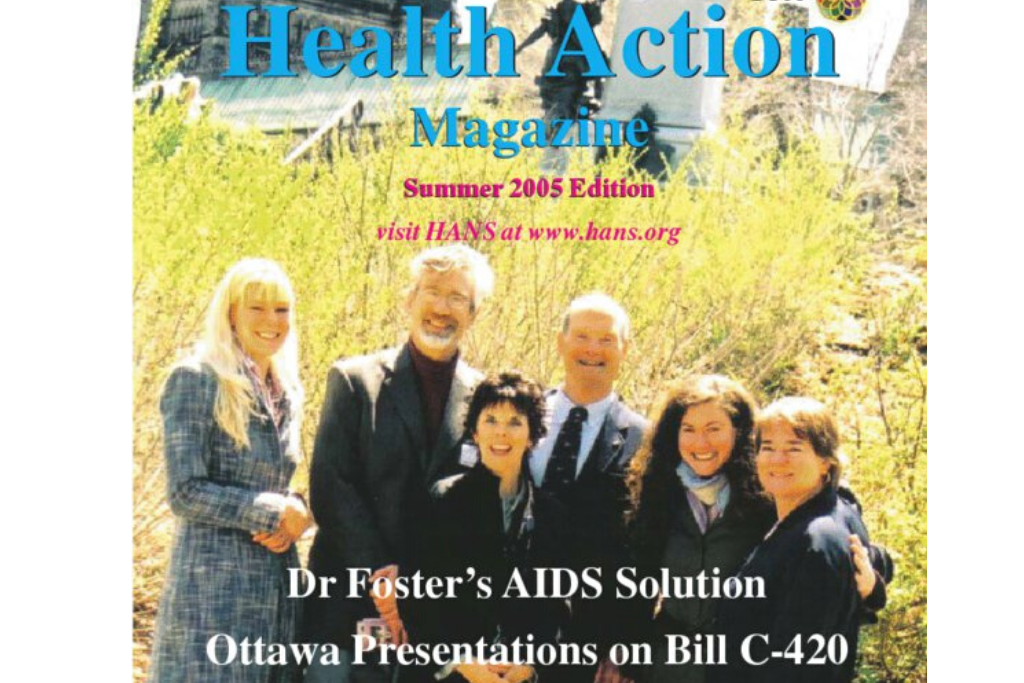